On the Wings of Eagle and Raven

Currently on view until July 6, 2014 On the Wings of Eagle and Raven, opened to public on April 11, 2014. The Haida and Tlingit Native Americans have a rich visual tradition that includes highly stylized artifacts and totem representations. Tlingit and Haida artifacts executed in wood, shell, hair, pigment, sinew, feather, and spruce root, reveal the artists’ exceptional craftsmanship. The exhibition will feature 41 cultural and material objects that date from the late 19th century to the present. Under the tutelage of Dr. Larry Silver, Farquhar Professor in the Department of the History of Art and Dr. Robert St. George, Associate Professor in the Department of History, Penn undergraduate students were involved in curating the exhibition and writing the exhibition brochure. This curatorial seminar was taught at the University of Pennsylvania Museum of Archaeology and Anthropology and 31 exceptional Tlingit and Haida artifacts are lent from the Penn Museum’s collection.

On March 19 Lucy Fowler Williams, PhD, Associate Curator and Jeremy A. Sabloff Keeper, gave a gallery talk “Are Old Northwest Coast Objects Meaningful Today? Tlingit At.óow in 2014” and shared valuable insight into potlatch traditions as well as issues related to NAGPRA repatriation and the importance of cultural sensitivity within the museum.

Concurrently on view with On the Wings of Eagle and Raven is Native American Voices: The People—Here and Now, a richly interactive new exhibition at the Penn Museum.

Robert Davidson is one of Canada’s most respected and important contemporary visual artists. A Northwest Coast native of Haida and Tlingit Descent, he is a master carver of totem poles and masks and works in a variety of other media as a printmaker, painter and jeweler.

April 23 at 5:00 PM   William Wierzbowski, Keeper, American Section, University of Pennsylvania Museum of
Archaeology and Anthropology
“Stories from Storage:  Behind the Scenes Lives of Objects”
Held in the Arthur Ross Gallery

Guest curator Dr. Larry Silver was asked a few questions:
What excites you most about this exhibition?
“I am very excited to restore these world-class objects to view after the closing of the Northwest Coast galleries at the Penn Museum, which were always a favorite place for me (among many).  For too long (as is often the case with the treasures of the Penn Museum) these remarkable works, most of them almost a century old, have been hidden in storage due to lack of space and staff to show them to the Philadelphia public”.

What do you hope Gallery visitors will glean from seeing Eagle and Raven?
“I hope that visitors to the exhibition will discover the unique, consistently elegant visual heritage of patterned ovals and decorative abstractions of animals.  But I also hope that the brochure and wall texts will reveal how these diverse and beautiful objects came to life in a wider context of public ceremonies and cultural celebrations by the Tlingit and Haida peoples.  I also want our small sample of contemporary works in diverse media to show how vital and creative these traditions remain in the hands of their living practitioners”.

What did you enjoy the most about teaching this course as a Curatorial Seminar?
“Teaching this material was a delight, since the students all assumed “ownership” of their chosen materials and media.  But the course had wider implications: about the overlap between the disciplines of art history and cultural anthropology; about the importance of living cultural traditions, nearly extirpated by misguided nationalism in the US and Canada; and about the ongoing issues of cultural patrimony and museum ownership, where the Penn Museum has been an exemplary custodian and a responsible partner with tribal leaders about appropriate repatriation of these esteemed objects.  Such lessons will stay with the students when they are future museum leaders or even trustees as well as future collectors and North American citizens”.

Curatorial seminar student Marlena Mattei states:
“I am most excited by the combination of the artistic and cultural significance of the objects in the exhibit. The beauty of the pieces is elevated by the important symbolism that they have within Haida and Tlingit societies. I am also looking forward to the lecture series, which features such notable experts in the field, all of whom I have studied in the curatorial seminar”.

“My favorite aspect of the curatorial seminar was the intimate experience I was able to have with the objects I studied. From close physical observation to in-depth archival research, I was able to immerse myself in and explore the subject”. 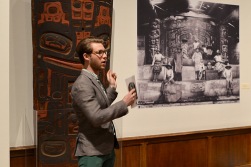 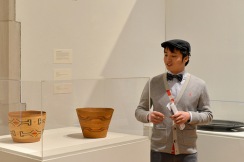 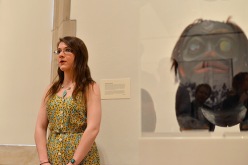 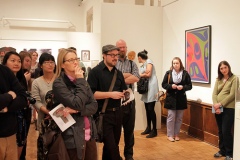